Deadline is too close?
Order an essay now and get it on time!
Quick Order
Fast Essay Writing Service
/
Blog
/
7 Fortnite Tips to Become Good at Fast Essay Writing
March4,2019, by Patricia Jenkins

If you haven’t been living under a rock for the last few years, you must have already heard about Fortnite. Even most people who have never played a video game in their life are probably aware of its existence by now. It would not be an exaggeration to say that Fortnite has ceased to be a simply extremely popular game and turned into a full-fledged socio-cultural phenomenon. You realize just how big it is when you take a look at how many people play Fortnite – it reportedly has over 200 million players, making it currently one of the most popular video games in existence. 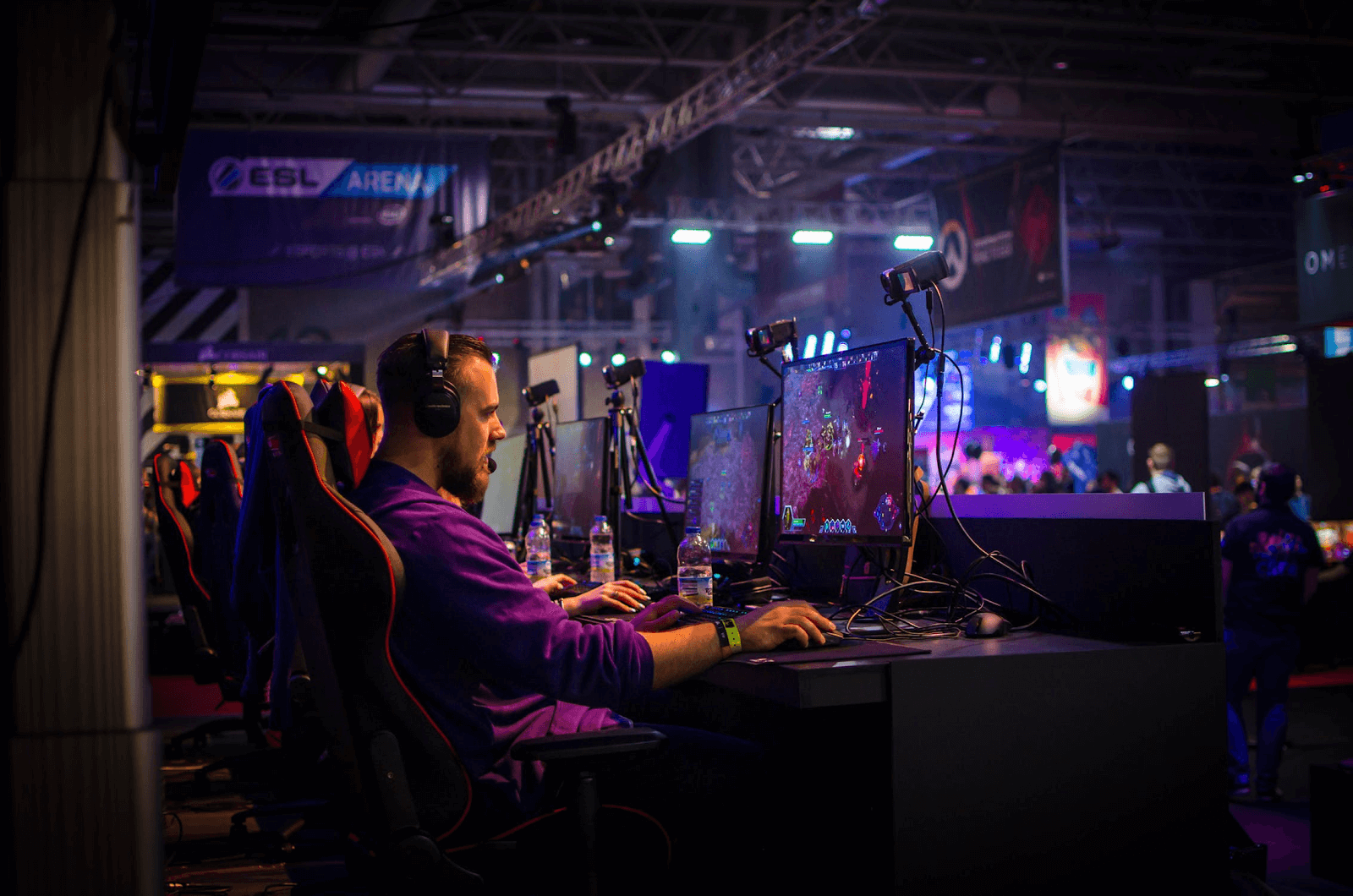 So what is Fortnite, exactly? In this article, we primarily speak about Fortnite Battle Royale, one of its three game modes that is primarily responsible for the resounding success of the franchise. As is clear from its name, it belongs to the currently extremely popular battle-royale genre – basically, a free-for-all battle for up to 100 participants. The battle is held in a limited and constantly shrinking playable area, which gradually forces players to move closer to each other. The match continues until there is only one man left standing.

Epic Games, the developer who makes Fortnite, wasn’t the one who invented the genre or even popularized it. The genre itself is based on the 2000 Japanese film Battle Royale, and the game that made it popular was PlayerUnknown’s Battlegrounds or PUBG for short. Unfortunately for its creators, PUBG was and still is plagued with bugs, cheaters, hackers, lags, graphics glitches, and other issues. If you ask yourself “When did Fortnite come out?”, you will see that it managed to ride the popularity of its predecessors gathering many players disillusioned by PUBG and offering a more polished, stylistically-appealing and, last but not the least, free-to-play experience.

Taking into account how many students play Fortnite, one would think that it can be a major drain on their productivity in school and college. But how would you react if we say that in addition to the fun you have playing Fortnite has a lot to teach you about studying in general and fast essay writing in particular? You will probably say that it is just wishful thinking. Well, consider what we have to say before laughing it off, okay?

🔥 1) Fortnite Teaches You to Make the Best of Your Situation

At the start of every match, players are randomly dropped across the island and have to scour their surroundings for weapons and resources. You have very limited control over where you are going to drop and no way of knowing what resources you will have to work with. It calls for inventive strategies and creative use of the limited tools you have at your disposal. The same goes for essay writing. Even if you know how to write an essay of this or that type, you may end up with a topic you don’t want to have anything to do with or a subject you can’t find any information about. So, the next time you get into this kind of trouble, simply think about it as a match gone wrong and try to find a way to creatively use what little you have.

How big is Fortnite player base? You’ve already known that there are more than 200 million players. However, you should realize that different types of players spend a dramatically different amount of time in the game, with the members of the core player base (about 40 million of those who play at least once per month) playing much more than the rest of the community. Therefore, as a beginner, you are going to be pitted against much more experienced players who aren’t going to go easy on you. In the beginning, you should be ready to lose a lot. But from these failures, you are going to slowly accumulate experience necessary to be the best of the best among your opponents. Maintaining this approach calls for patience and the ability to learn from your mistakes – exactly what you need to learn for high-quality essay writing. If you have little or no writing experience, no amount of theory is going to help you write a good essay. You have to work out on your own based on what works and what doesn’t for yourself.

⏳ 3) It Teaches You Effective Time Management

One of the major differences Fortnite has from most other battle-royale games is the resource gathering and building mechanic. The pickaxe you carry around allows you to gather resources and build various objects to improve your position. Combined with the limited time you have until the storm closes in, it requires you to maintain the balance between gathering enough resources, building and getting to the safe zone in time.

This is pretty much exactly what you have to deal with when you write a research paper. You have limited time and have to skillfully manage and control it to divide what you have between research, writing per se and editing. Quick essay writing isn’t just about your typing speed – it is also about your ability to work efficiently and know how much preparation is enough. 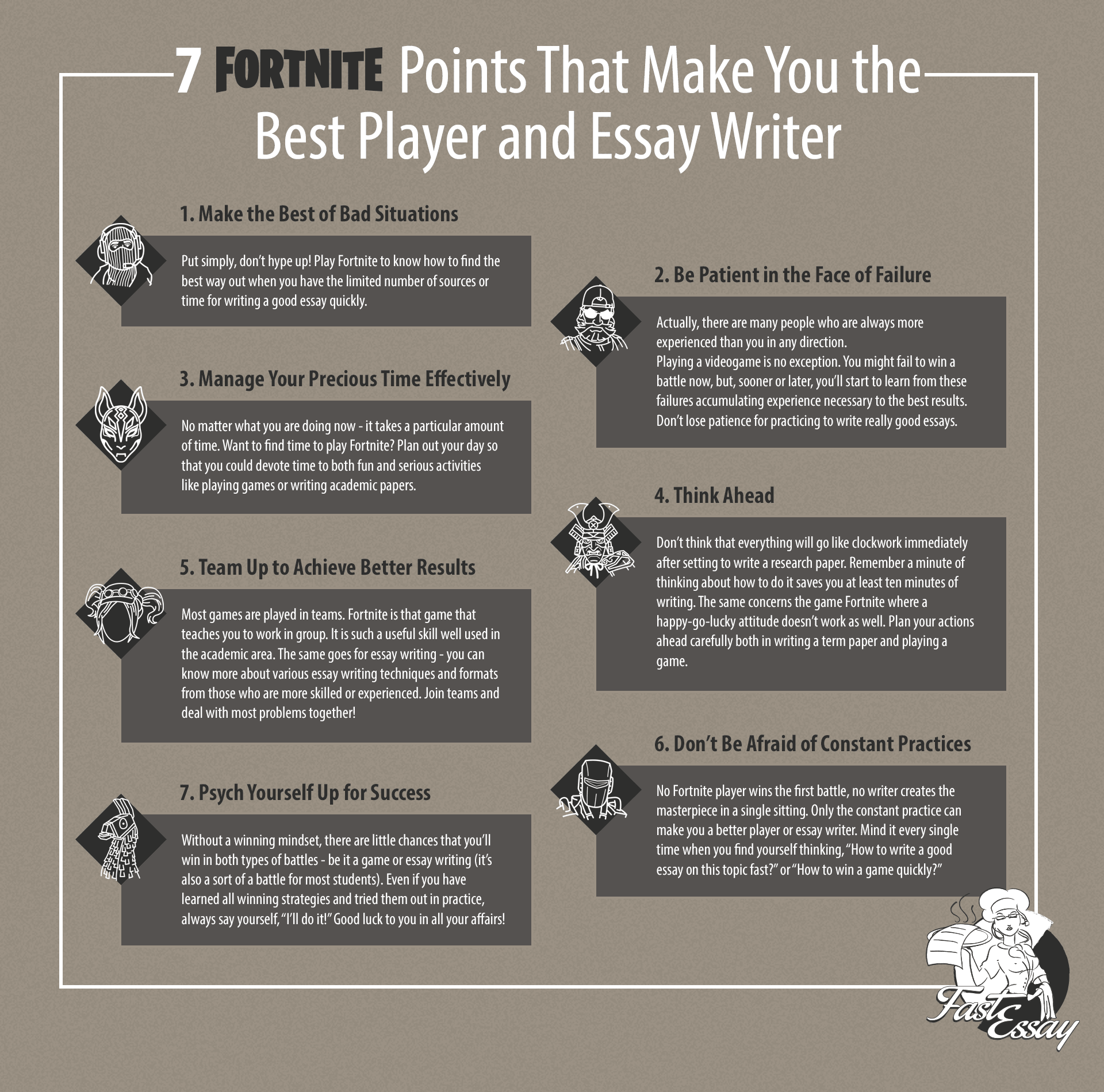 ✏ 4) It Teaches You to Think Ahead

If you want to write your paper fast, probably the worst thing you can do is to skip preparation and planning and move on straight to writing. Chances are that you will have to rewrite fragments of your paper multiple times forgetting to mention important points and make a mess of the general structure in your paper. As they say, a minute of preparation saves you at least ten minutes of writing. The same goes for Fortnite – just jumping straight into the fray is a surefire way to get yourself killed. It is a game that doesn’t reward a happy-go-lucky attitude and taking chances without thinking things through. If you want to have a fighting chance to win a match, you have to carefully plan your actions ahead and prepare for the changing conditions. Thinking on your feet is good, but it is much better if you have already done all the thinking you need beforehand.

✅ 5) It Teaches You the Importance of Communication and Cooperation

Although Fortnite Battle Royale is primarily associated with the “Last Man Standing” mode, it can be played in teams (and the original game mode, Fortnite Save the World, is exactly this – a cooperative game). And this game serves as an excellent demonstration of the maxim that a team often can easily achieve the results that are impossible or very unlikely for an individual. A newbie is better off teaming up with more experienced players than trying to figure things out by himself. The same goes for essay writing. Although you can teach yourself how to write, some things can only be learned from experts, especially when it comes to quick writing tips – it is very unlikely that you will stumble upon them on your own. Ask more skilled writers for advice, say “Write my research paper introduction so that I learn how it is done properly”, consult those who have already worked on the topic in question. All this will help you deal with problems that are too hard to handle by yourself.

🛠 6) It Proves You the Importance of Practice

No Fortnite player wins his first match. With 99 other players out there willing to kill you, chances are that you are going to die within minutes of the match’s start. Only by playing a lot, learning new strategies and trying them out in practice, improving your skills and developing your own approaches to problem-solving can you hope to ever get a chance to be the last man standing. No amount of online guides and manuals can teach you to be better – only constant practice can make you a better player. And it is a mindset that would be very useful when dealing with fast essay writing. You cannot simply read a guide on how to write an essay quickly and magically become able to do it. If you want to be able to write high-quality papers without spending too much time on them, you have to first spend a fair share of time practicing it.

It doesn’t matter how experienced a player you are, sometimes, you just have to deal with bad luck. You may fail to find a good weapon or medical supplies quickly enough. You may be dropped in the same spot with a couple of other players. The safe zone may turn up too far away to be reached in time. Skills and preparation can alleviate some of these problems, but sometimes your luck is too atrociously bad to do anything about it. In this case, the best you can hope to achieve is to do your best, even if it is clear from the very beginning that you aren’t going to win – and who knows, perhaps you can turn the tables after all. In essay writing, you can sometimes be given a topic you know nothing about and have to do a lot of painstaking research. Your work may be so uninspiring that it fails to impress your professor even though you spent dozens of hours on it. You may fail to write the essay quickly even though usually it doesn’t present any difficulty to you. You may discover that you’ve mixed up your formatting styles and have to do everything over. Again, sometimes it isn’t about your skill – it is about bad or good luck.

While looking for writing lessons from Fortnite may be a little bit desperate, it doesn’t mean you cannot glean some useful insights from your time spent with the game. And if you are going to play anyway, why not do it?

Loading...
← Use Free 5 Apps and Programs to Craft Academic Writing
Easy Ways How to Write a Research Paper Fast →